In Dust We Trust

by DISCIPLES OF POWER 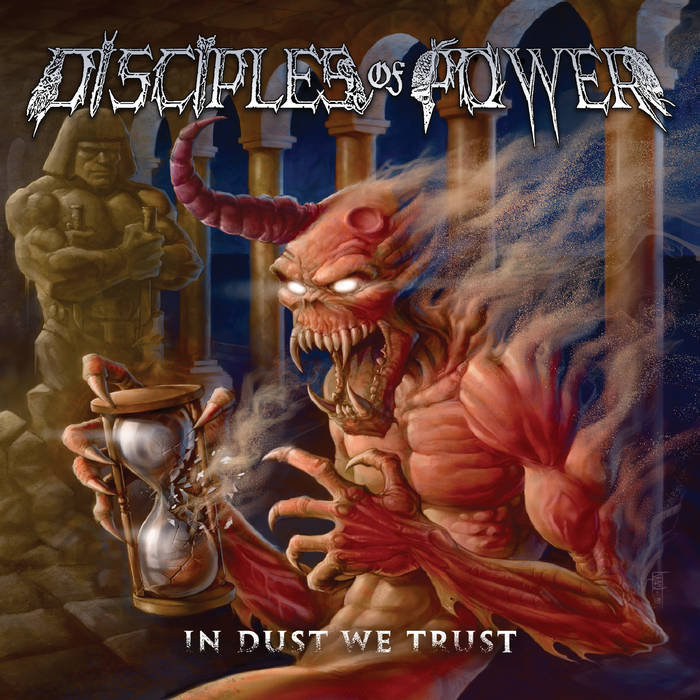 Formed in Medicine Hat, Alberta, Canada during the mid-'80s, DISCIPLES OF POWER is the brainchild of guitarist/vocalist Hart Bachmier, who steered the group through more than a decade of demo recordings, record label woes, lineup changes, and four full-length albums—Power Trap, Ominous Prophecy, Invincible Enemy, and Mechanikill—before the band dissipated during the late-'90s. Throughout that time, Bachmier developed his high-speed tech-thrash attack toward an increasingly diverse and death metal-leaning approach; relentlessly promoting DISCIPLES OF POWER to the point of literally taking a Greyhound bus across Canada selling merchandise out of suitcases for a spell in the early-'90s. DISCIPLES OF POWER's live résumé was boosted through opening slots for such legends as Annihilator, Anvil, Exciter, Forbidden, Razor, Sacred Reich, and many more.

After a failed recording contract with Cargo Records and a parting of the ways with Fringe Product (Razor, Sacrifice, Slaughter, Corpus Vile, etc.) after two albums, Bachmier formed his own label—Mindt Gash Records—continuing his D.I.Y. approach by self-releasing DISCIPLES OF POWER's output from that point on. This self-reliant ethic continued when the band regrouped in the early-2000s, resulting in fifth and final—for now—album, In Dust We Trust. Conceived during a tenuous time for the lineup, In Dust We Trust remains a bit of an overlooked "black sheep" amidst the DISCIPLES OF POWER back catalog, despite putting forth some of the group's most memorable—and well-produced—progressive and technical death/thrash compositions.

So now, more than 15 years later, Divebomb Records is proud to shine a new light on this underrated gem from DISCIPLES OF POWER. Completely remastered by Jamie King at The Basement Recording, this edition of In Dust We Trust features reimagined cover art by Steven R. Cobb and a 16-page booklet featuring lyrics, photographs and an extensive retrospective interview with Hart Bachmier himself. For the fans, by the fans!