I Hate Therefore I Am 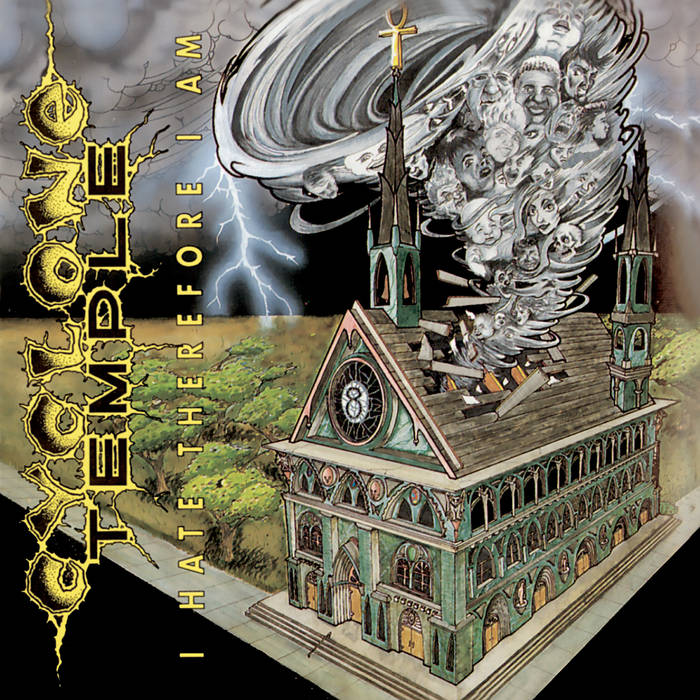 To tell the story of CYCLONE TEMPLE, one must begin with Znöwhite. Formed in 1982 by siblings Greg Fulton (guitar) and Tony Heath (drums) along with their cousin, Curtis Fulton (bass), Znöwhite eventually welcomed singer Nicole Lee and became one of the more promising speed metal acts in the U.S. Throughout the mid-'80s, the Chicago-based outfit issued two EPs and a live album before signing with Roadracer Records for the release of their critically acclaimed album, Act of God, in 1988.

Following lineup changes that found Fulton surrounded by an all-new cast consisting of Scott Schafer (bass), John Slattery (drums), and powerhouse ex-Hammeron vocalist Brian Troch, a name change was imminent. Rechristened as CYCLONE TEMPLE, the group signed on with Combat Records and entered Normandy Sound in Warren, RI to track their debut album, I Hate Therefore I Am, with engineer Tom Soares.

A soulful masterpiece of thrash, I Hate Therefore I Am arrived in stores in 1991, and CYCLONE TEMPLE toured with a variety of acts before being unceremoniously dismissed from their label during a Sony takeover. As such, the groundbreaking creativity, intelligence, emotion, and power of I Hate Therefore I Am unjustly failed to make its mark. A frustrated Troch walked away, and CYCLONE TEMPLE soldiered on to release an EP (Building Errors in the Machine, 1993) with singer Marco Salinas, and follow-up album My Friend Lonely—with yet another vocalist, Sonny DeLuca—before throwing in the towel in 1994.

But, it's never too late to have one's mind completely blown to bits by a criminally underrated thrash classic such as I Hate Therefore I Am, so now, over 25 years later—and for the first time since 1999—Divebomb Records is proud to make I Hate Therefore I Am once again available on CD. Remastered by Jamie King at The Basement Recording, the disc will be packaged with a retrospective essay featuring brand new commentary from ALL FOUR members; plus nearly 20 reverential quotes contributed by members of Aftermath, Broken Hope, and Sindrome (among others), as well as authors from Decibel, Rock Hard, MetalSucks.net, and many more. You'll also find a reprinted interview feature from Detonator fanzine #2, conducted by Starkweather vocalist Rennie Resmini in 1991. For the fans, by the fans!

Issued under license from Lonely Planet Productions/Relativity Records
THIS TITLE IS NOT AVAILABLE FOR SALE DIGITALLY!